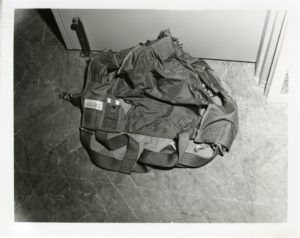 In Part 4, convicted skyjacker Martin J. McNally (“Mac”) relates how a local St. Louis man is drinking at the Lambert Airport Mariott Inn lobby bar. The bar patrons are watching this skyjacker drama live on a television. A patron abruptly leaves the bar with a comment something like, “hold my drink and keep watching, you’ll see something!”  Mac has taken a lesson in how to strap on a parachute, received the 1/2 million cash in a leather American Airlines pouch, given several possible destinations to the Captain and ordered the plane to take off. As the aircraft taxis down the runway, the pilot yells 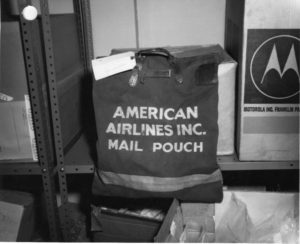 back, “Oh my God, there is a car on the runway!”  Mac feels a thump and the planes skids to a stop. With all the window shades closed for security, Mac becomes very tense. The flight crew assures him this  is no plot to storm the plane and somebody has crashed into their nose gear.

Mac directs the Captain to obtain another plane and have it parked next to his plane. The F.B.I. and American Airlines comply with the skyjacker’s orders. All the money, guns, parachutes and flight crew board the new plane. He has specified another Boeing 727 because he needs the rear stair for his mid-air exit.

He directed the pilot to fly north from St. Louis toward Toronto. He ordered the plane to fly low over the Canadian airport so he could look out and verify they were over Canada. After that he requested the pilot to fly toward New York City. He reveals how he had trouble lowering the rear stairs and the plane had to slow down to 300 mph. After one last check of the altimeter and the heading, Mac orders the entire crew to stay up front. He closes the First Class curtain, walks back to the stairs and straps the 45-50 pounds of cash around his waist with a leather belt. You must listen to his ordeal of going down these stairs and finally letting go into the night. At this time, he does not have any idea where the plane is in relation to the ground. He has a thought they could be over Lake Michigan, but dismisses that with the thought that he is a good swimmer. He later learns that the weight change when he left the plane alerted the Captain he was gone. The pilot  alerts the F.B.I. tracking plane and they mark the spot.

As Mac falls he spins out control, he is able to find the rip cord and deploys the parachute. He feels a jerk in his leg as the money bag is affected by the chute opening. Listen to learn how Mac felt as he watched the money satchel fall away into the darkness.