Our D. B. Cooper copycat, Martin J. McNally, continues with his fascinating account of a real life skyjacking. He has selected Lambert Field in St. Louis and has arrived at the gate. Mac gets on the plane and takes his seat. This plane is a Boeing 727 arriving from New York and proceeding on to Tulsa Oklahoma. When the Captain announces the descent into Tulsa, Mac takes his attache case and heads to the rear bathroom. Inside, he puts on a cheap wig and takes out his “grease gun.” He exits the bathroom and observes the 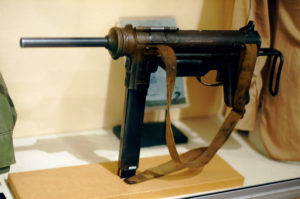 flight attendant has gone to the front of the plane. He frantically waves to get her attention and motions her to come to the back. As she arrives, he produces the gun. Mac instructs her to tell the captain the plane is to turn around and return to St. Louis. She does that and returns to the rear. The Captain announces they are returning to St. Louis because a passenger has requested this action. Because the passengers start to grumble and look around, Mac orders the stewardess to remove the rear seat passengers and seat them closer to the front, leaving several empty rows between himself and the passengers. He notices one man glaring at him and may have an idea about taking action. Mac stares him down and gives him a growl. The man quickly complies and moves to the front.

This is just the beginning of a harrowing ride back to St. Louis and back into the air while American Airlines gathers up the $502,200.00 cash ransom Mac has demanded. We learn the odd number was part of his overall plan to bury the $500,000.00 and use the $2200.00 as walking around money until he can return for the ransom.

A very unexpected event will happen as Mac gets the money and starts to make his getaway.