The Law Enforcement Intelligence Unit (LEIU) was the most elite unit on the KCPD. LEIU was also the name of a national organization of police intelligence units.  In the 1950s as criminals became more mobile operating across state lines, larger city police departments found it difficult at best to learn about criminals who were from far off cities. In particular, La Cosa Nostra families, were committing criminal conspiracies that encompassed several jurisdictions.  The F.B.I. and most notably, J. Edgar Hoover, did not trust local police departments, sometimes for good reason. Hoover did not believe there was Sicilian based organized crime families either. Not all local police departments were riddled with corruption and in 1956,  representatives from 26 local and state law enforcement agencies met in California and formed the LEIU to share information. One of the first rules was that they allowed no new members if any existing member accused the new applicant of allowing any kind of corruption inside the department. They knew that to be effective and foster an atmosphere where confidential information could be freely shared, they must remain more virtuous than Caesar’s wife. At one time, a paranoid J. Edgar Hoover ordered agents to investigate this new organization. Hoover soon learned the new organization was above corruption and could be an asset. LEIU could be called the Interpol of the United States. At one time they were so secret that most officers of the member agencies were unaware of the national LEIU organization. Today they have a public website and a LEIU Facebook Page you can like.

I was selected to join the KCPD Law Enforcement Intelligence Unit in 1976. I was just in time to take part in a major investigation of the mob in Kansas City. During my 13 years as a detective I investigated members of the Civella crime family, groups advocating civil disorder, the KKK and other professional criminals operating across jurisdictional boundaries. In my next posts I will begin telling stories from my career.

Nick Civella returned from Chicago and he became the driver for Tony Gizzo, the Kansas City Boss. This was a promotion in La Cosa Nostra hierarchy. To those in the know, Nick  was being groomed for the job of boss job. He had one big job. Two mob members named Charlie Gargotta and Charlie Binnagio had been given the task of delivering control of the Kansas City Police Board to Mafia controlled politicians. They failed and it is believed that Nick masterminded their murder. The inserted photo shows Gargotta’s body on the floor of the Northeast Democratic Club. Very interesting picture of Harry Truman witnessing the murder scene. To learn more about the early days go to www.blackhandstrawman.com

One hidden microphone in the Villa Capri restaurant in Kansas City led to wiretaps and hidden microphones in Milwaukee, Las Vegas, Chicago and 19 separate wires in Kansas City. In Chicago, agents developed probable cause to place a tap on a telephone in the office of Allen Dorfman. They soon learned that Chicago Mob Caporegime Joseph “Joey the Clown” Lombardo frequented this office. Chicago Agents code named this Operation Pendorf or penetrate Dorfman.

Allen Dorfman was the step-son of a Chicago gangster named Red Dorfman. After WW II, he became friends with Teamsters president Jimmy Hoffa and rose in the ranks of both the Teamster’s Union and the Chicago Organized Crime family. Dorfman formed the Union Insurance Agency and soon had an exclusive contract to sell insurance to the Teamsters.

Dorfman became influential in the Teamster’s Central States Pension Fund. He was part of a cabal of Mob bosses from Cleveland, Milwaukee and Kansas City who determined who got pension funds loans. For this, he and his Chicago mob bosses demanded kickbacks. In this video clip, you will hear Lombardo on the phone in Dorfman’s office. He is threatening St. Louis lawyer and Dunes Casino owner Morris Shenker that he will not reach his 73rd birthday if he does not pay a kickback on a pension fund loan.

Gangland Wire starts in an unusual place. In 1971, a local businessman named Marion Trozollo had an idea to revitalize a blighted area close to downtown. At that time, city dwellers were fleeing to the suburbs and downtown was losing businesses and population. Mr. Trozollo envisioned a French Quarter or Greenwich village type of district in an area close to the City Market. The area took off as artists, clothing store owners, restaurant operators and bar owners moved in for inexpensive rents and proximity to downtown.

Freddie Bonadonna opened a restaurant and bar and found success. He had the foresight to lease unused city market parking lots for the evenings and weekends.  Freddie’s father, David Bonadonna, was a soldier in the Kansas City La Cosa Nostra family. David’s crew chief or Caporegime was William “Willie the Rat” Cammisano. Willie wanted a piece of the parking lot money and David was given the task to convince his son, Freddie, to share in this bounty. David was unable to deliver and this film clip tells what happened.

Gangland Wire tells the real story behind the book and film, Casino. The film’s Director, Gary Jenkins, was an Intelligence Unit detective with the Kansas City Police Department. It is not often that a documentary filmmaker is  a participant in the events documented. He starts with a local mob squabble that escalates into several murders and bombings. The Director was assigned to a team that gathered information about these events and the mobsters involved. This local mob war led the investigators to place a microphone in a Kansas City tavern named the Villa Capri. This little mike picked up a lot of disco music from the adjacent jukebox. However, in between songs, monitoring agents heard references to Las Vegas Casino business deals. The mike led to wiretaps on other phones. Before this investigation was over, the F.B.I. was uncovering a national conspiracy of La Cosa Nostra families using Teamster’s pension fund money to finance Las Vegas casino owners. The price for the casino owner being approved for a Teamster pension fund loan was to allow the Midwest mobs to place people into key casino positions. Those employees job was to skim cash from the counting rooms and send it back to Chicago, Milwaukee, Cleveland and Kansas City.

Director Jenkins was able to find hours of the audio tape used as evidence to convict the La Cosa Nostra bosses in Chicago, Milwaukee, Cleveland and Kansas City for this conspiracy to skim. The viewer will hear out of the mobster’s own mouths just how they conducted their business,

Looks like I am speaking on Sunday the 7th, click here for link to website. I am looking forward to meeting some of these former mobsters who have written books and gone on the speaking circuit. The old Mafioso Dons are spinning in their graves.

Gary Jenkins will appear in the first ever Mob-Con at the Palace Station Hotel and Casino in Las Vegas on September 8, 2013. Gary will give a one-hour program at 11:30AM in the Grand Ballroom. This event is organized by Mr. Robert Allen, a veteran convention promoter and a retired mobster named Frank Culotta. Starting with a cocktail party on Thursday, September 6th, this event features speakers from made members of La Cosa Nostra and F.B.I. agents and Police Officers who investigated Mob activity. 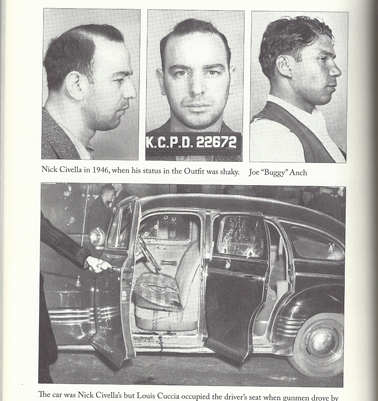 Mario Puzo took from real life in his novel, The Godfather. In New York City younger Sicilian immigrants were seeing their fathers victimized by the old fashioned “Mustache Petes” by the Black Hand organization. The young guys  were also being kept out of the more lucrative rackets. They struck back eventually. In 1940s Kansas City, a young Nick Civella showed his independence from the Mustache Petes by holding up “protected” gambling games.

In William Ouseley’s Mobsters in our Midst, former F.B.I. Agent Ouseley writes that on January 22, 1946 a confederate of Nick’s named Joe “Buggy” Anch was murdered. Eight days later, Nick was meeting with  Jackson County Deputy Sheriff named Louis Cuccia at the Trucker’s Liquor Store, 1901 E. 15th. Nick sat in the passenger seat of his car while Deputy Cuccia sat in the driver’s seat. Gunfire erupted and the Deputy was killed. Nick got away and fled to Chicago, Illinois. He had connections there and was protected until he could negotiate his return.

The Chicago Outfit has its roots in Sicily as with other La Cosa Nosta (LCN) style organized crime organizations of La Familia. As with the New York based LCN families, the old world  Mustache Petes were usurped by  the younger mobsters in the 1920s. Al Capone and Prohibition brought national attention  to the Chicago family. Capone made millions from illegal booze and along with government officials of the City of Chicago and Cook County they created an institutional system of corruption that lasted until the 1980s.

The origins of the Kansas City Crime Family, known better on the street as the “Outfit,” date back to the early part of the 20th Century. A small band of immigrant Italian/Sicilian predators, operating in the Little Italy north end section of the city, coalesced, organized and united during prohibition to become an organized crime entity. During Prohibition the Kansas City mob became part of a nationally structured Italian/Sicilian syndicate that came to be known as La Cosa Nostra. Chosen as the Kansas City boss of the Outfit in 1953, Nick Civella was arrested at the famous 1957 meeting of La Cosa Nostra Bosses in Appalachia, Mew York. The Kansas City Outfit was riding high during the 1970s.  This video tells about those beginnings.

Two unrelated events would result in the end of the Outfit’s Las Vegas money train and the incarceration of Outfit leaders from Chicago, Milwaukee, Cleveland and Kansas City.

The first event was the murder of an Outfit member named Nick Spero in November of  1973. Nick was a Teamster’s union official. Nick was seen as ambitious and seeking to expand his power with the outfit. The Civella dominated Outfit could not allow anything to threaten their influence over the Central States Teamster’s Pension Fund. In true gangland fashion, Nick Spero’s body was found in the trunk of his car in an isolated area of North Kansas City.  Nick’s brothers did not let the murder of their brother go unanswered.

The second event began with an entertainment district development known as the River Quay. A businessman named Marion Trozollo parlayed his Teflon-pan success into revitalizing the rundown City Market district. The River Quay quickly became the hippest entertainment area in Kansas City. The Outfit believed they had a proprietary interest in the City Market area. The son of an Outfit soldier, Freddie Bonnadonna opened a successful River Quay bar called Poor Freddie’s. Freddie Bonnadonna had an exclusive contract to lease night-time parking rights in City Market parking lots. Outfit members became jealous of Freddie’s success. This, in addition to Freddie’s resisting the introduction of mob controlled strip clubs into the Quay, set into motion a series of violent and deadly events.

Gangland Wire tells the story of how revenge, greed and jealousy put the F.B.I. on a path leading to the end of Mafia influence over Las Vegas casinos and over the Teamster’s union and their Central States Pension Fund.

Stephen Metelsky on Hells Angels and other mobs