Bill Norton, KC Star reporter, and the Star paper became a thorn in the side of the La Cosa Nostra in Kansas City. As you can see from Gangland Wire, Nick Civella paid a lot of attention to press coverage. He knew the press would create community pressure on law enforcement to take action. More importantly, Nick knew press attention caused their corrupt politicians to “run for the hills” and to distance themselves.  After the Johnny Green Amaro hit, the Civellas came to the Star office and complained about Star coverage.
What they did not like was these maps of their neighborhood. The Star hired a plane and took this photo and matched it up to the drawing to 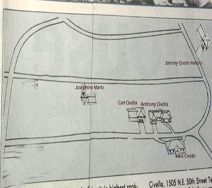 show where everybody lived. The “Johnny Green” killing happened about a block from the Civella compound.