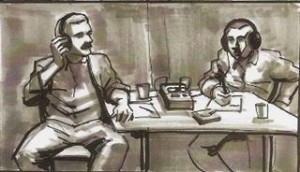 The F.B.I. spent thousands to install a decent microphone in the visitors area of the Federal Prison at Leavenworth. This is bad, but it is the best they could do under the circumstances. Bugging is not easy.

Nick Civella continued to run his organization out of the Pen.  In this audio clip he is talking with his nephew, Anthony “Tony Ripe” Civella. Nick’s wife Kate is there serving up home made food.  They discuss the Rabbi who is Allen Dorfman, a Chicago area businessman who made a fortune selling insurance to the Teamsters rank and file members.

Ripe tells Nick that a mob guy is complaining to Dorfman (the Rabbi) that he not making enough money from a prescription drug plan he is selling to the Teamsters. Nick retorts, “Uh he ain’t making not money, 6 million a year, well why don’t he give it up?” Nick then instructs Ripe to tell Stomp (Anthony Chivolla is Nick’s nephew and a Chicago police officer) to get a phone number with no connection to Civella and put the number in a sealed envelope and bring it to Kansas City and give it to Kate, Nick’s wife. He tells Kate that he does not want to hear anything about this on the telephone. Nick will then call this number to pass instructions. These are the lengths they went to get safe phones for communication.

Lucky Luciano and the Dannemora Priest