I am going to explore the Kefauver Hearings in Kansas City in this blog.  In April 1950, the body of Kansas City mobsters Charlie Gargotta and Charlie Binnagio were found in the Democratic Club at Truman and Charlotte. These assassinations intensified national concerns about the post-World War II growth of powerful crime syndicates and the resulting gang warfare in the nation’s larger cities.On May 3, 1950, the Senate established a five-member Special Committee to Investigate Organized Crime in Interstate 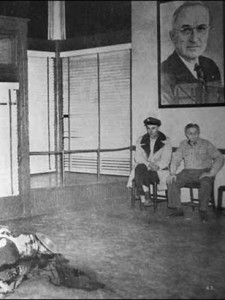 These hearings brought into the American vernacular this famous phrase, “I’ll take the fifth amendment!” In Kansas City, the hearings were held at 811 grand, the Federal Courthouse. This building is listed in the National Register of Historic Buildings and is now apartment lofts. Another famous case was Thurgood Marshall argued for integration of the Swope Park swimming pool at this courthouse.

I have attached a clip from The National Crime Syndicate’s You tube page.