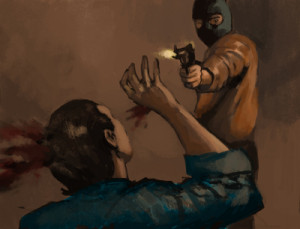 Black Mass is the type of story that I call, “You can’t write this Sh$t,” this has to be lived. Johnny Depp, as James “Whitey” Bulger, has the dead eyed soulless persona down. I have met two other men in my life like this, and when they looked me in the eye, they were devoid of any human feeling. I can recommend this film for that alone.

The true crime fanatic has another reason to see this narrative film. Screenwriter, Mark Mallouk’s depiction of F.B.I. agent John Connolly as James “Whitey” Bulger’s informant handler was so true to life, it was scary. Australian actor, Joel Edgerton, captured the personality of a man in over his head at work. He became that ego maniac with an inferiority complex whose reach has far exceeded his grasp. As a young policeman, I learned that smart and capable professional criminals often become “informants” and use their handler’s egos to achieve their own criminal goals. It takes a strong personality and self discipline to control them, Connolly had neither. Screenwriters Mark Mallouk and Jez Butterworth  were able to capture the subtle intricacies of that type of relationship. The one thing that did not ring true (for me, it is important that a true crime story is believable) is the scene where Whitey has an interaction with Connolly’s wife. The only other problem I had with the film was, there is no “good guy.” But, the story was so compelling and well acted, I can forgive them. In the subculture of real cops and real robbers, many times there is no real good guy.

Mark Mallouk is from  Prairie Village, Kansas which means he probably attended Shawnee Mission East High School. Mallouk graduated from the University of Kansas with three degrees; a BA in Economics, a BA in Psychology and a BA in Human Development. He then attended Pepperdine University and obtained a MBA. He was bitten by the film bug in L.A. and completed the Professional Program in Screenwriting at the UCLA Graduate School of Theater, Film and Television.

Mallouk is working on a screenplay about Frank Calabrese Sr and the crime family he ran out of Chicago that was known as The Outfit. Frank Calabrese Sr. was a vicious mob extortionist and killer. I met his son, Frank Calabrese Jr. at the 2013 Las Vegas Mob-Con. He is the co-author of Operation Family Secrets, the true story of how a father pushes his son into the mob and what happened to bring Calabrese Jr. to the point that he wore a wire on his own father. This is another compelling mob story that should be made into a movie. Frank Jr. helped bring down his own father for involvement in 13 gangland murders as well as other crimes.