John “Brother John” Lazia (spelled Lazio on the tombstone) was born in New York in 1895. He dropped out of high school in the eighth grade. By 1915, Lazia had moved to Kansas City. Lazia’s first known arrest was in 1916, after robbing a man on the street. In an exchange of gunfire, Lazia was arrested. He was convicted of armed robbery and sentenced to 12 years in prison. Nine months later the Missouri lieutenant governor paroled Lazia on the condition that he join the Army. Lazia obviously had made political connections by the age of 20 because instead of joining the Army, KC political boss, Tom Pendergast gave him a job in his organization.

Click here to “buy me a cup of coffee”

To go to the store or make a donation or rent Ballot Theft: Burglary, Murder, Coverup  click here

In the next few years, Lazia had graduated from street crime to organizing voters for the Pendergast machine and supplying bars with bootleg whiskey. By the late 1920s, Lazia had become the supreme gang boss in Kansas City. In 1928, Lazia was appointed head of the Northside Democratic Club. Lazia owned a soft drink company, several upscale gambling resorts in the city, a profitable loanshark operation, and a bail bond company.

Lazia enjoyed considerable political power within both the Kansas City Police Department and the city administration. He was given an office in police headquarters and had the approval of all hires and fires. In 1929, Lazia was convicted of tax evasion and sentenced to one year in prison. However, thanks in part to the influence of Tom Pendergast, the government released Lazia’s pending appeal. Many civic reformers decried Lazia’s influence and power but were unable to affect any changes. 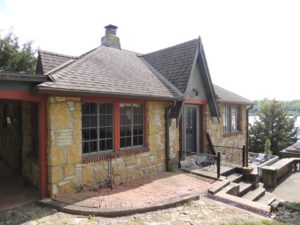 Lazia’s criminal activities translated into a comfortable and pleasant life. He and his wife lived in a luxury apartment in Kansas City. Lazia vacationed at his resort on Lake Lotawana in suburban Kansas City. Lazia also owned several thoroughbred race horses and was a constant presence at sporting and civic events. He donated regularly to 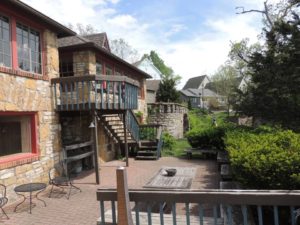 charities. Despite all of his criminal activities, Lazia was able to maintain a generally positive public profile.

The tremendous public outrage over the shootout convinced the Pendergast machine that Lazia had become a liability that needed to be eliminated. Without his political protection, Lazia was indicted for bootlegging, illegal gambling, and tax evasion. Lazia eventually pleaded guilty to tax evasion and was sentenced to one year in prison.

On August 12, 1933, Lazia associate Charles Gargotta,  Gaetano LaCoco, and other gunmen ambushed a gambler named Ferris Anthon, a gunman allied with a rival faction, on a city street. However, Jackson County Sheriff Tom Bash and his deputy coincidentally arrived during the attack and after a shootout, Gargotta was captured. The guns used in the attack were eventually traced back to the armory, and Gargotta went to prison. 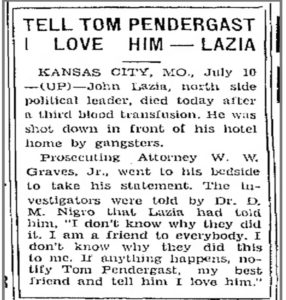 after a night out on the town with his wife and bodyguard, Charles Carrollo. As Lazia was exiting from the car, two gunmen armed with a submachine gun and a sawed-off shotgun emerged from the bushes. Lazia pushed his wife back into the car and told Carrollo to drive off. The gunmen sprayed Lazia with bullets and left him on the sidewalk.

“Doc, what I can’t understand is why anybody would do this to me? Why to me, to Johnny Lazia, who has been the friend of everybody?”

Law enforcement traced some of the bullets in Lazia’s body to bullets found in the Union Station massacre, creating suspicions that it was a Lazia ally who murdered him.

Thanks to Christopher Williams for the Lazia vacation home photos.

Thanks to Wikipedia and Terence O’Malley.

The news articles used were from www.newspapers.com.

2 comments on “The Murder of John Lazia”