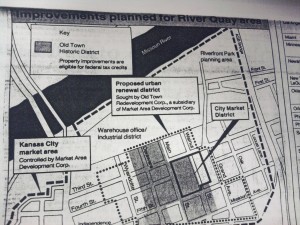 I have not said much about the River Quay development. The first 1/2 of Gangland Wire tells the story of how this entertainment district developed. A man named Marion Trozzolo (click on his name to see the book he wrote) had a business in the City Market area. He saw all these great substantial unused brick buildings going to waste. He bought up some and obtained leases on others. He fixed up a few and enticed artists, restaurants and other small boutique type businesses to open with cool spaces, low rents and a proximity to downtown KC.

The City of KC had forced a block long strip of seedy bars to relocate because of a new convention hotel construction. These guys were connected to the local mob and they wanted to move into the River Quay. The son of a mob guy owned a successful River Quay bar named Poor Freddies. Freddie Bonadonna resisted this move by these mob associates because he knew this would destroy the friendly family oriented atmosphere that was making him and others money. His father was ordered to make Freddie quit resisting and to help them make this move though his own political connections. Freddie refused and his father, David Bonadonna, was killed. This murder was the beginning of the end for the River Quay. Freddie Bonadonna lived out his life in the Witness protection program.