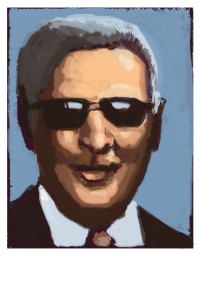 In the late 1970s, the Nevada Attorney General Bob List has filed  an action to ban Lefty from working at the Stadust. Mr. List is running for governor and Lefty Rosenthal has come up with a blackmail plan to get him to stop his action against Lefty. Joe Agosto has advised Carl “Tuffy” DeLuna of this plan. In this excerpt from the microphone in the Quinn & Peebles office, Tuffy tells Nick about the plan. Nick’s reaction shows he is not just an old gangster in modern times. A few days later Nick will get Lefty on the phone and tell him to “cool it, just cool it.”

The F.B.I. investigation failed to uncover any malfeasance on the part of Bob List.

Michael DiLeonardo of the Gambino Family