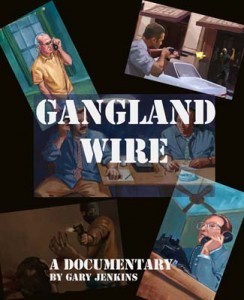 Skimming from the Casino

I am working on a book about the Las Vegas Casino skim investigation. With the new Kindle format being so popular, I have the idea that I would put a link to the actual audio when I use part of the actual transcript in the book. I am looking for feedback. Does this work or not? Read down this post and click on the hyperlinked words, WDM-38 PAY TELEPHONE. Please be critical, this is a lot of work and I don’t want to do it for nothing.

By August 4, 1978, the deal for the Tropicana owners to purchase the Stardust was off. Agosto called Deluna. He reported that Transmission (Jack Ulrich), Hunter (Diel Gustafason) and La Femmena (Mitzi Stauffer Briggs) had backed out of any effort to buy the Stardust. Tuffy asked why and Agosto replied, “Because of the Aladdin.” Tuffy said that bothered him and he did not understand why they would have been “shook up” over the incident.  Agosto replied that people getting arrested is not just every little thing. DeLuna wonders if Agosto would fall apart if something happened in his house. Agosto reports that Transmission and Hunter are relieved the deal is off, but the La Femmena is disappointed.

The Aladdin hotel/casino, famous for hosting the wedding of Elvis and Priscilla Presely in 1967, had long been of interest to the F.B.I.. In 1968, a consortium of veteran Las Vegas casino investors purchased the Aladdin. Casino executive Sam Diamond, St. Louis politician Peter Webbe, Sorkis Webbe, and Richard Daly paid $5 million. Using Teamster’s pension money, they gave the Aladdin a $60 million facelift including the addition of a 19-story tower, and the new 7,500 seat Performing Arts Center. F.B.I. agents began looking into the casino affairs at that time.

Apparently the Tropicana owners backed out of purchasing the Stardust because two days before this conversation, on August 2, 1978, the U.S. Department of Justice indicted Aladdin Casino executives James Tamer, James Abraham, Edward Monassum and Charles Goldfarb. They were  charged for  participating in a scheme of unlawful control and management, or hidden ownership, of the Aladdin Hotel and Casino. The press reported that the real targets of this hidden ownership investigation were Detroit Mob figures, Anthony Giacalone, Vito Giacalone and Anthony Zerilli.

THE FOLLOWING IS A SUBSTANTIALLY VERBATIM TRANSCRIPT OF A CONVERSATION BETWEEN DELUNA: CARL ANGELO DELUNA, AND AGOSTO, JOSEPH AGOSTO

DELUNA: What do you say?

AGOSTO:       Well, the only thing I want to tell you that I talk to my people and I told the deal is off.

AGOSTO:       And ah, ah, Transmission, ah, and Hunter were kind of relieved.

DE LUNA: Kind of what?

DELUNA: I can’t hear you.

DE LUNA: Well okay. Why though?

AGOSTO: On account of this deal in ah, Aladdin, they’re really shook up about it, you know.

DELUNA: It kind of bothers me that, that something like that would bother them two guys.

AGOSTO: Yeah, it did, it did bother them.

DELUNA: Well, Jesus Christ, can’t get shook over every little thing that happens.

DE LUNA: Ah, they shouldn’t get shook up over every little thing.

DELUNA: Yeah, but it ain’t got nothing to do with ah, with ah,

AGOSTO: Have you read the paper on the Aladdin?

AGOSTO: You read them all?

DELUNA: Yes. But I mean it I don’t see why Transmission and Hunter should get so terribly —

AGOSTO:       Because he feels the situation is hot here right now and if there is ah, you know if there is a, a, a, a cooling off period, you know, they, they, I mean they

DELUNA: I could understand

AGOSTO: Can you understand what I am saying?

DELUNA: Sure I do.

DELUNA: I understand the atmosphere.

Bonus – The Murder of Sol Landie

The Mob and the Teamsters Part 3 -Roy Lee Williams