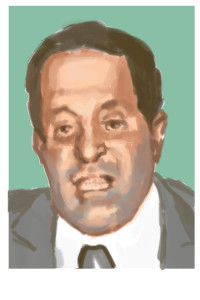 Nick Civella‘s mole in Las Vegas was Joe Agosto. Immigration claims he was born  Sicily, probably in the 1920s. He claims he was born in a Cleveland brothel and had been sent back to Sicily as a child. The government tried to deport Agosoto several times and he finally prevailed in 1978. He obtained the status of citizen. He spent some time in Kansas City in the 1940s, but he was not a long time Kansas City guy. It cold be speculated that he came to know Nick Cviella during this time. In 1973, Nick Civella recruited him to assist John “Johnny Green” Amaro in a mob scheme. The plan was to promote a legal services benefit to Teamsters Union members. Nick would provide the assistance of KC Teamster leader, Roy Lee Williams. In return, Agosto paid Nick Civella $75,000.00 up front. The scheme failed.

Joe Agosto was still loyal to Nick. Agosto was either dispatched or went on his own to Las Vegas. He started the process to build a hotel and casino with Civella’s backing and Teamster’s money. Carl “Tuffy” DeLuna, as KC Underboss, was assigned to oversee and monitor Agosto’s activities. Joe found a more lucrative opportunity. He found out the owners, Deil Gustafson and chemical heiress Mitzi Stauffer Briggs Smith were depending on a Teamster’s loan of $50 million dollars. Nick Civella used his influence to squelch that deal. Then Agosto came in as a savior and a new Teamster’s deal was offered. During this time, Joe Agosto was able to obtain the confidence of Ms. Briggs-Smith and he obtained the rights to the floor show called the Folies Bergere. As he gained influence, Nick and Tuffy instructed him to get former Stardust and Circus Circus casino executive, Carl Thomas, a job. Thomas was owned and controlled by Nick Civella and the KC mob. He set up the scheme of skimming by placing his own trusted crew inside the count room. Here, they just took cash off the top before the daily take was counted. he explains this in great detail in my film Gangland Wire.

One of the more interesting events during this time was the time Nick Civella ordered a moratorium on all skimming. He wanted to see of anybody was skimming from the skimming. Carl Thomas tried to reassure him that he trusted all “his guys.” Soon, the skim started back up at a pace of about $40,000.00 per month.