Gaetano Lococo was known as one of the “5 Iron Men” in Kansas City La Cosa Nostra history. He started as an enforcer for a 1930s Kansas City political boss named Johnny Lazia. In the famous 1950s Kefauver hearings on Organized Crime, Senator Kefauver described “Tano” Lococo as  “Lococo was a mousy, insignificant, bespectacled little man whose appearance belied his reputation as another of Binaggio’s enforcers.’”  It is said that a well known Kansas City Italian restaurant “Gaetanos” was named after him. He had a nephew named James S. “Jimmy” Duardi. Jimmy Duardi began in the Kansas City Rackets during and just after WW II. Jimmy first came to law enforcement attention when he was suspected of being involved with Nick Civella in the Binaggio and Gargotta murders and later in 1952 he was arrested in another murder.  Jimmy moved to Vallejo California for a few years until he cooled down in Kansas City. 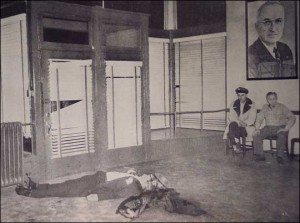 I was once following Lococo and another of the original “5 Iron Men”, Joseph Filardo. Filardo was famous for being caught with Nick Civella at the 1957 Mob Conference in Apalachin, New York. I entered an elevator with these famous gangsters and they were like a couple of little (under 5-5) old men. It was hard to see them as men who struck fear in the hearts of others.

Back to Jimmy Duardi. When I was first assigned to the Intelligence Unit, my friend, Bobby Arnold was also a new guy in the unit. He had been out looking for the movements of known mob guys and noticed a large gregarious man at a restaurant frequented by mobsters. He was back at the Unit and saw Duardi’s picture on the wall. He claimed this was the man he saw. The older detectives hooted him down because they just knew Jimmy was in prison in

Leavenworth. Bobby calls Leavenworth and learns that Jimmy is assigned to the minimum security farm and one of his jobs entails him taking a prison vehicle into Kansas City to pick up supplies. And, Jimmy was supposed to be in Kansas City on that date.

My next post will be the story of why Jimmy was in Leavenworth and then on to Bobby Arnold and I monitoring Jimmy when he was released from prison.