Joaquin “Jack” Garcia was actually born in pre-Castro Cuba. His family immigrated to the U.S. in the early days of Castro because his father was going to be arrested by the new regime. As a child, Jack was often the target of bullies because he did not speak English. His size and demeanor quickly put an end to the bullying. He grew into a 6′ 4″ 250-pound college football player. he became interested in law enforcement and tried several times to join the FBI. Finally, he saw an advertisement that the FBI was looking for native Spanish speakers and applied to that program. When he was finally accepted after many attempts, he learned the Bureau had rejected him before because they learned the CIA had a file on him and his family.

The FBI, after rejecting him for being Cuban born, took advantage of his natural Cuban accented Spanish. Jack chose the undercover name, Jack Falcone. TheFBI assigned him to work on Omega 7, an anti-Castro Cuban terrorist group. They also had him infiltrate all the various Cuban groups in Miami, the FALN – Puerto Rican terrorist organization, and investigate Cuban spy cells sent by Castro. He found himself the target of a death threat and the Bureau sent him back to the New Jersey and New York City area.

After several years working different Hispanic narcotics gangs where he acted as a money launderer and took down a group of dirty cops in Florida, the FBI decided they might send him into a mafia group. he was able to befriend a Gambino capo, named Greg DePalma. DePalma loved to use Garcia’s size to intimidate other mobsters and associates.

This week on December 19th and 11th, Amazon will allow free downloads of my book, Leaving Vegas. This is a two-day only Chrs=istmas present for listeners and their friends. Be sure and tell everybody and share on your social media outlets. 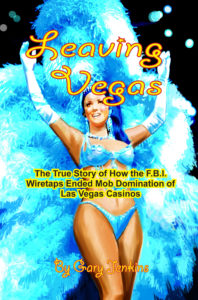 To go to the store or make a donation Click Here.

To rent Brothers against Brothers, the documentary, click here.

To subscribe on iTunes click here, please give me a review and help others find the podcast