In 1929, John Lazia owned a luxurious dinner club and casino called the Cuban Gardens. Like the Mirror Lake County Club and the Riverside Race track, this club was located in a rural area, north of the Missouri River. It was very close to the Race Track. Lazia required customers to be formally dressed. Like any respectable speakeasy, a new customer had to have a connection to gain admittance. The staff was all sharply dressed. A close look at some revealed a gun in their waistband. The entertainment was always a big band,  usually playing swing or Latin dance music.

Andy Kirk was a 1930s era jazz musician and leader of the nationally known, Clouds of Joy. Kansas City’s famous pianist, Mary Lou Williams was a member of this band. Chuck Haddix in his book,  Kansas City Jazz – From Ragtime to Bebop, recounts a Mary Lou Williams’ story about the band’s brush with Kansas City’s dark side of the jazz scene. The band was playing at the Cuban Gardens. Andy Kirk was playing tuba while the lead singer, Bill Massey, was conducting the band. Bill Massey got into an argument with the club manager. Ms. Williams described him as a “hood” who said, “You guys better pack up fast, the rest of you are too nice for me to kill Massey.” She reports they packed up and left. The Clouds of Joy resumed playing at the Pla-Mor, a large 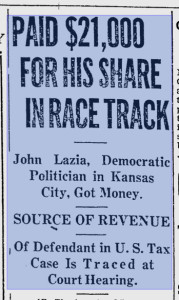 ballroom located at Linwood and Main.

An interesting fact is that the Cuban Gardens was located just inside Clay County, about 1/2 mile east of the Platte County Line on 9 Highway about where the current Broadway Extension crosses over 9 Highway. This is about 1 mile west from the KC Waterworks plant. The Riverside Race Track was probably less than a mile west into Platte County. The old Cuban Gardens site was completely wiped out by new construction of 9 Highway by 1970. See the facebook site On the Spot Kansas City (History of KC’s criminal past) for aerial photos.

Tom Pendergast had a long time interest in horse racing. William H. Reddig, in his book “Tom’s Town”, explains how horse race betting became legal. The Supreme Court interpreted a law that declared the “certificate” form of betting in a horse race was legal. This meant that a race fan could “contribute” some money  to “improve” the breed. Soon a group of Pendergast associates formed the Riverside Park Jockey Club and took over a Riverside, Missouri dog track. This became known as Pendergast’s Track.

Local gamblers saw an opportunity in opening a gaming casino close to the track. Mr. Heddig reports that a Kansas City gambler named Jake Feinberg opened the Green Hills Club in the area. This was soon closed by Platte County Presbyterians. Shortly after, just over the Clay County line, Johnny Lazia opened the Cuban Gardens.

Phil McCrory, a Pendergast associate, advanced $12,000.00 to Lazia.   In an interesting side story, in 1922, the Drover’s Bank in the Livestock Exchange building was robbed of $100,000.00. The money was never recovered. The suspects were found to be St. Louis criminals. The getaway car was found. This car was stolen from Phil McCrory and left within 50 feet of where it was taken. A subsequent investigation caught the bandits and there never was any known connection to Pendergast or McCrory. 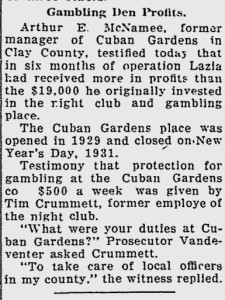 When Lazia opened the Cuban Gardens in Clay County, the open gambling was soon attacked by the Ministerial Alliance of Liberty. After several raids by the Clay County sheriff, no evidence of gambling was found.

In Tom’s Town, Mr. Heddig reports Lazia kept armed guards at a small gatehouse to admit the autos of Customers. Inside the club, the gambling was like that in the back of Rick’s in the film, “Casablanca.” The actual casino was in a back room closed off to the restaurant and guarded by armed men in evening clothes.

It is reported many of the elite Kansas City folks frequented this club for the great food cooked by chefs imported from Europe.  This clipping tells how they were able to avoid Clay County law enforcement.  The Cuban Gardens closed on New Year’s Day in 1931. John Lazia would be the victim of a Mob execution in 1934.  Tom Pendergast’s reign will end in prison in 1939.