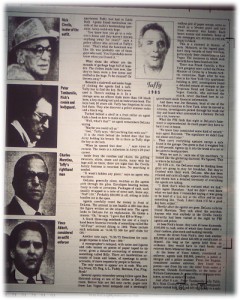 Tuffy DeLuna was raised in Kansas City. At some point in time, he became friends with the Civella family. Anthony “Tony Ripe” Civella married his sister, Molly Deluna. By the 1950s Tuffy is known as an enforcer for Nick Civella. In 1960 Felix Ferina and Tiger Cardarella (known for Tiger’s records) were up and coming young mob guys. They were given the assignment to execute a government witness named Kenneth Bruce Sheetz. They failed to finish him off after they shot him. Sheetz lived to testify and the attempted hit made headlines. The story is that Ferina and Tiger were trouble and Tuffy was promoted up a rung and soon became Nick Civella’s Underboss.

In the early 1960s the F.B.I was planting microphones and installing telephone taps without judicial authorization. The take from those installations could only be used for intelligence purposes and not in court. One of the mikes was placed in Original Toy & Jobbing Co. at 9th and Central, KCMO. They learned that Nick was controlling a sports betting operation and a Jewish guy named Morris “Snag” Klien was the manager.

Nick was receiving a lot of law enforcement attention and the bug revealed that he was spending a lot of time at Mirror Lake Country Club in unincorporated Platte County. The hidden mike also revealed that he had given Tuffy DeLuna the job as the go-between Nick Civella and Klein as well as other gambling managers.

By the time of the 1970s Las Vegas casino skimming investigation, Tuffy was the go- between for the Kansas City, Chicago, Cleveland and Milwaukee mob bosses and Lefty Rosenthal and Joe Agosto. Rosenthal and Agosto were skimming money from Las Vegas Casinos for the Midwest Families.

The below clip is an excerpt from Stardust Casino owner Allen Glick’s testimony.