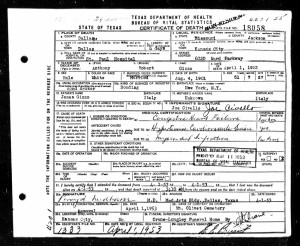 The Kefauver hearings provide much insight into KC mafia persons.  An opening paragraph to these hearings:

“Coates House enterprise which, incidentally, in the year 1948 made a net profit of $100,000. The other partners in this enterprise were Tony Gizzo and three lesser lights: Mel Levitt, Sam Butler, and Joe Danzo. Binaggio also had an interest, of record, in the dice games ; for example, the dice game on the Goulding property at Southwest Boulevard  and the State line. Gargotta had an interest in a race horse news information service — the Standard News Distributing Co. — and he also had an interest, with Binaggio, in the State line dice games. Lococo was on record as a one-fourth owner of the Standard News Distributing Co. (which is controlled by the Universal News Service), and he also had an interest in the State line gambling operation, as well as an interest in a dice game at Ninth and Woodland, and others. Balestrere, the fifth of this quintet, has no recent record of being connected with any gambling operation. However, since it is known that Binaggio was collecting Balestrere’s share of the profits in the Green Hills gambling house, Balestrere’s interest in the venture was generally referred to in the racket as “Balestrere has a piece of Binaggio.”

Tony Gizzo was famous in the Kefauver hearings for pulling out a lot of cash money and laying it on the witness table.  During his testimony before the Kefauver Committee Gizzo admitted he was an acquaintance of numerous top mobsters throughout the country. Kefauver described Gizzo as, “a boastful, noisy, beer barrel of a man” Senator Kefauver alleged that Tony Gizzo’s performance was a reasonable facsimile of how a gangster is supposed to act.” When asked about how much cash he usually carried, Gizzo replied, “Do you want to see it?” He then pulled out a roll and counted off twenty-five $100 bills.

Click here for the transcript from the hearing about Kansas City. Very interesting stuff like about the gambling action at the Coates House hotel.

I attached Anthony Robert “Tony” Gizzo’s death certificate and his registration for the draft. He died of natural causes (heart attack) while on a trip to Dallas Texas. I notice in the death certificate that he died on April 1, 1953, with a Joe Civello being the reporting person and his last address was 6020 Ward Parkway. The certificate claims Gizzo was born in New York City on 8-4-1901 and that he was married. His father was listed as James Gizzo born in Italy. The section for mother contains the word “unknown.”

In contrast, his draft registration indicates his mother was a Martina Madero at 623 E. 6th Street. I 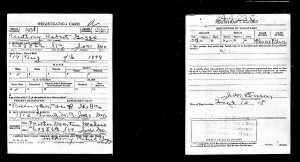 believe this was made up because if his mother was known and lived in Kansas City, she would have been listed on his death certificate. It would be disrespectful to do otherwise.  It has been my experience that Italian men do not disrespect mothers.

Bonus – The Murder of Sol Landie

The Mob and the Teamsters Part 3 -Roy Lee Williams