This is the first episode of a three-part series on the Union Station Massacre with my friend Terence O’Malley. If you saw the documentary films, Nelly Don – A Stitch in Time, Blackhand Strawman or Tom and Harry, then you know Mr. O’Malley’s great work. He also has companion books out for Nelly Don and Blackhand Strawman. Click on any of the above links to see more about Terence’s projects.

Terence is an expert on Kansas City during the 1930s and 1940s. He created a documentary film as a work for hire for the Union Station. This film tells the story of the massacre. In this famous watershed event, the prisoner, an F.B.I. agent, two Kansas City, Missouri, police officers, and a police chief from Oklahoma were killed. This event would result in the 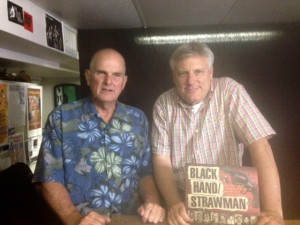 creation of the modern Federal Bureau of Investigation.

In June of 1933 a bank robber named Frank “Jelly” Nash was arrested in the infamous gangster hideout of Hot Springs, Arkansas. He was to be taken by train from Arkansas through Kansas City, Missouri to the Leavenworth Federal prison. During this trip Nash’s criminal friends concocted a scheme to force his release from custody before they got him to Leavenworth. After a series of phone calls from Hot Springs to Chicago and Kansas City, his pals were able to connect Verne Miller,  a bank robber laying low in Kansas City, with KC mob boss Johnny Lazia who connected Miller with Charles “Pretty Boy” Floyd and his sidekick, Adam Richetti.

While this was not a KC Mafia operation, Lazia bore some responsibility for making these connections. Nothing, like this, happened in Kansas City without the approval of the Mob.  So, listen as Terence tells this great story and learn little known details like how most of the killing was done by a shotgun mix-up and an accidental discharge.

A great resource for more information and to see copies of newspapers accounts of the massacre go this facebook page, The Union Station Massacre Exhibit Confidence Initiative.

In Episode 1, Terence will tell about the arrest of Jelly Nash and what happened the day preceding the massacre.

Michael DiLeonardo of the Gambino Family