The Department of Justice sentencing guidelines send Mac to the famous maximum security federal prison at Leavenworth, Kansas. Here, he has a fateful meeting with another skyjacker named Gordon Trapp Brocknell.

And, just when you think it is all over for Martin Joseph McNally, the case takes another unusual twist at the Super Max Penitentiary in Marion Illinois. McNally and his new friend and fellow skyjacker Garret Brock Trapnell wait in  the prison yard while Barbara Oswald, a women in love with Trapnell, hijacks a helicopter and forces the pilot to fly to the prison. Mac and Trapnell see and hear a helicopter in the sky. As the chopper pilot, Allen Barklage, descends, gunfire explodes and the female passenger is killed. The chopper goes back up and lands outside the prison. Mac tells how Trapnell just collapsed, while he and another prisoner frantically try to get back inside the prison exercise yard. As they climb back down off the last roof, a guard spots them.

Now, you think this story is over, not yet. Trapnell had one more escape attempt in him. The daughter of Barbara Oswald, Robyn Oswald will attempt to hijack a plane as it lands in Kansas City. She uses a bomb looking device to force the plane to divert to Marion, Illinois. Here, she demands the release of her mother’s lover, Gordon Brock Trapnell. 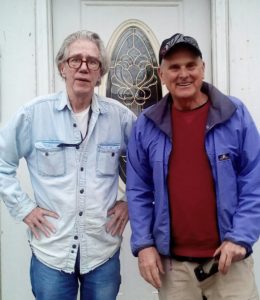 Mac tells how he goes on to be a “jailhouse lawyer” helping inmates with legal research and appeals. Finally, Mac is released after 37 years. He has been out on two life paroles and totally square for about 6 years. Mac was helped with housing by a prison ministries program and he subsequently helped with counselling other newly released inmates.  He has an upcoming hearing to be finally released from his parole.